A traditional resort choc-full of great chalets that is part of one of the biggest ski areas in the world and just an hour from Geneva.
The Editor's SnapshotOverviewSki InfoBeginners & KidsApres & NightlifeThree of the BestMorzine Chalets

650 Km (linked to Les Gets, Avoriaz, Chatel, Champery and others in Portes du Soleil region)

There’s a wide range of ski schools to choose from including a number of British run operations.  The main nursery slopes and ski schools are in the Pleney area a snowsure location above the village, accessed by an easy to use gondola lift.

Wide ranging options for parents to choose from including private nanny and babysitting services, tutoring for older children or the municipal nursery that accepts children three months and up.  Ski school available from age three and older at Piou Piou (part of ESF) at the foot of the Pleney slopes, right in town.

Morzine is a classic, traditional French ski village that is linked to the huge Portes du Soleil ski area, as vast region which straddles the French-Swiss border, inter-connecting the skiing above a dozen villages in north countries with 650km of runs. So it’s perfectly possible to ski over to Switzerland for a spot of lunch then back to France for dinner. One of the easiest resorts to reach from Geneva (or indeed if you wish to self-drive from the UK) it’s a sizable resort with excellent facilities and many, many chalets to choose from.

Morzine may have become one of the greatest ski resorts in the Alps over the past century but its history dates back at least 800 years before that when records point to it being  owned by a local monastery. This history underlines its pre-ski-era growth as a market town which today translates in to a village with a rich heritage and hundreds of great cafes, bars, shops and restaurants to enjoy. Most of these are built to a traditional style, using local slate, and many are indeed reinventions of ancient buildings, brought in to the 21st century but  till oozing age-old charm and ambience. Busy year round, in summer it’s a top mountain and road biking destination and a frequent stop on the Tour de France.

Morzine has a timeless feel and even though its busiest in the ski season, it remains a bustling mountain market town throughout the year. Along with the many dining and nightlife choices and a good selection of shops, there are some excellent public amenities including the ice centres where you can skate or watch a hockey match and the recently built indoor leisure complex (2012) with 50 metre pool and spa facilities and a 50m swimming pool.

The village’s nearest neighbours in the Portes du Soleil are the futuristic, car-free Avoriaz,  directly above the village, which offers the highest skiing in the whole region up to at 2,466m, and Les Gets, another traditional resort with which Morzine shares a rather private sector of the vast ski area. The whole area benefits from a snowy microclimate thanks to its proximity to both Mont Blanc and Lake Geneva which means that on  average snowfall is greater than usual for its altitude. 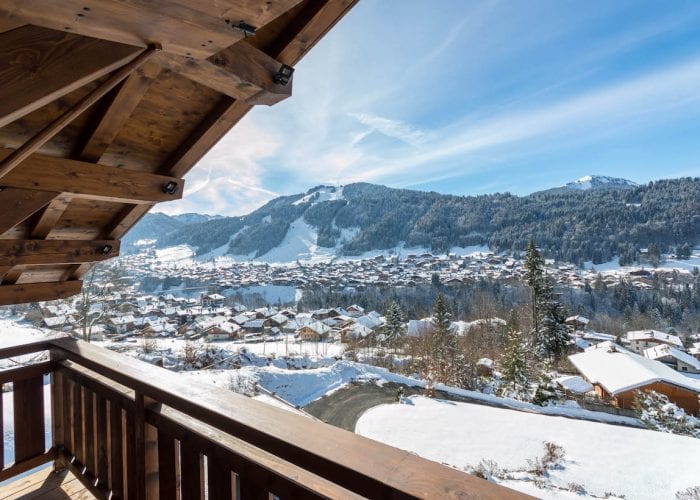 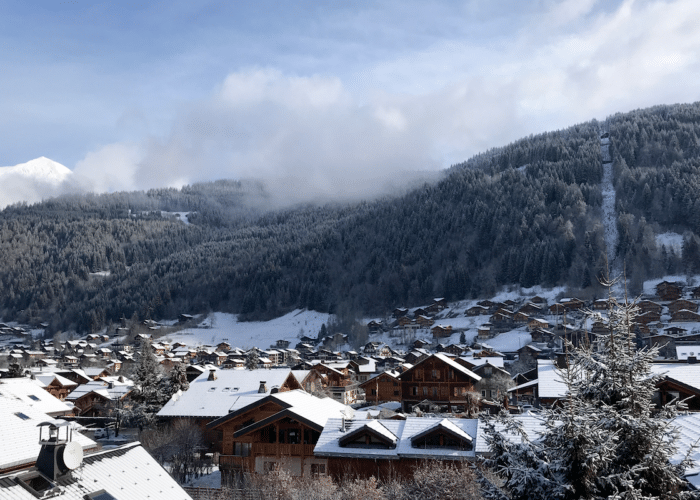 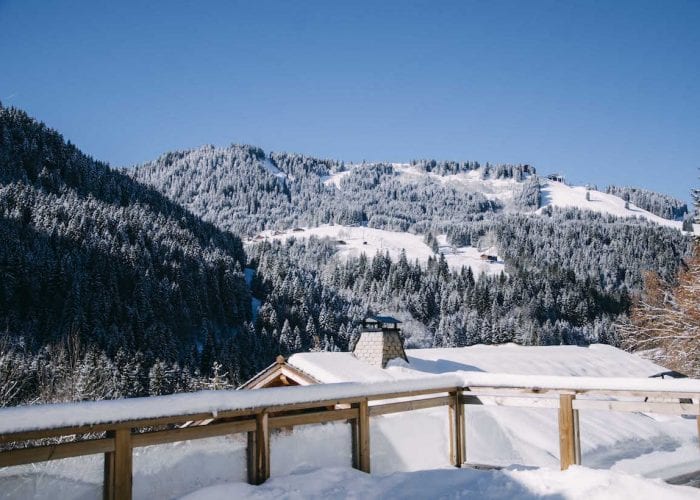 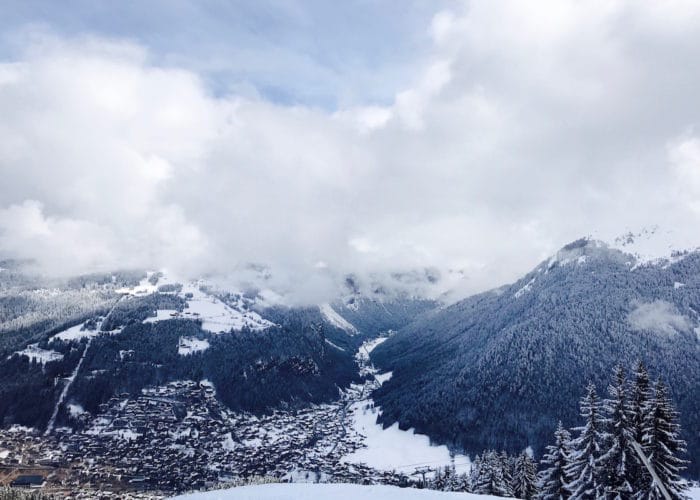 Morzine’s popularity is unsurprising for many reasons, but it’s fairly central location in the Portes du Soleil is certainly a big part of it.  Along with the easy connections to Les Gets (via the Pleney lift) and Avoriaz, the Super Morzine lift provides access to the Linderets sector and links across to Chatel  as well as Les Crosets on the Swiss side of the region. So this really is an intermediate skier’s paradise with not only new runs to ski every day of the week but a whole different sector to dive in to daily from your Morzine base.

A recently installed lift that  links the Linga and Super Chatel sectors – previously requiring a bus trip – means a full day ski circuit of the Portes du Soleil is now possible passing seven separate resorts. The resort does not have quite such a strong reputation with expert skiers as a Chamonix or St Anton and yet there are plenty of challenges to be had on and off piste in the region and the infamous ‘Swiss Wall’ run down from the French to Swiss side of the Portes du Soleil, a huge steep slope of car-sized moguls, has to be ticked off the bucket list.

As you’d expect for such a large resort with a high proportion of British guests, there are wide ranging facilities for children. This includes private babysitting and nanny services with a large number of agencies active in the resort.  Some individual chalets also offer their own in-house provision. The resort itself has a village nursery complete with playroom, feeding changing room and beds, based in the purpose-designed L’Outa chalet in the centre of the village, which accepts babies from three months old up to children aged five years.  Ski school is available from age three and older at Piou Piou (part of ESF) at the foot of the Pleney slopes, right in town. Another option is private tutoring in British school subjects available for children aged seven and up.

In terms of ski school for older children and adults, the various schools offer private and group lessons, usually from age three. The village nursery slopes are accessed via the Pleney gondola at a location that’s high enough to normally ensure the snow quality throughout the season. The gentle beginner slopes here are ideally located for progression on to slightly more challenging but still easy runs as you or your child progresses.

Definitely one of the livelier resorts in the French Alps.  There are dozens of bars that are buzzing as soon as the lifts close, although given its size there are plenty of quieter venues too if you’d like a more sophisticated night out.

For apres ski Tremplin or Crepuscule are both options for dancing to loud music whilst still wearing your ski or (more comfortable) board boots and The cavern is very popular too.

Dixies claims to be the biggest venue in the resort with the widest drinks selection and a changing menu of apres ski entertainment including djs, live music and comedy acts. It’s one of several open from 4pm to 2am.

There’s a huge choice of bars of all shapes and sizes through the evening and if you’re still going past midnight that’s when the Opera night club opens – with dancing through to 5am weekend, 4.30 midweek.

Chez Nannon run by the Baud family up at Nyon is a small traditionally French mountain restaurant that’s almost universally loved by Morzine regulars, primarily as it gets the basics spot on: good food, good service and fair pricing.

Les Lhottys Restaurant (+33 4 50 34 92 09) (Better known to regulars as ‘Lhotty’s Hut’) is located at the top of the Nauchets chair lift, 1670m up.  It’s a great choice for regional specialities including tartiflette or onion soup and has a good vegetarian range too. There’s a great sheltered terrace if the weather is good.

Le Vaffieu (+33 4 50 79 09 43) is an eternally popular (booking a table for lunch highly recommended) choice. Located at the top of the Folliets chair there’s a great atmosphere and of course, very good food.

Le Clin D’Oeil (63 route du Plan; restaurant-leclin.com) has risen to the hallowed TripAdvisor top spot of the 150 or so choices in Morzine. It offers superb food including vegetarian and vegan options, reasonable prices, great service – simple.

Le Samaoyede (hotel-lesamoyede.com) restaurant in the large four-star hotel of the same name has long been regarded as one of Morzine’s best with a wide-ranging menu of French and international cuisine.

If you’re after a French fromage feast, or indeed any other traditional French meal in a convivial atmosphere and location you can’t go far wrong at La Grange (lagrangemorzine.com), one of the best in town.

Progression Ski and Snowboard school (progressionski.com) have built a reputation as one of the best in the French Alps over the past decade or so. Great for private lessons, off piste guiding and everything else.

Ski Beyond (skibeyond.co.uk) is a British run ski school with more than 10 years’ experience in the region and lots of local knowledge. They take a holistic approach to teaching mind and body.

A group of independent British instructors work together as The Snow Institute (TSI) (thesnowinstitute.com), they offer all types of private and group lessons subject to your requirements. 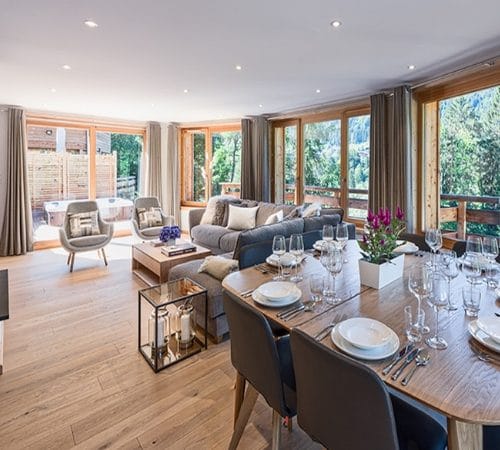 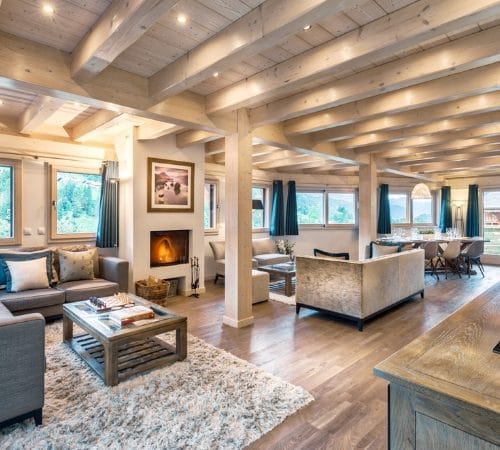 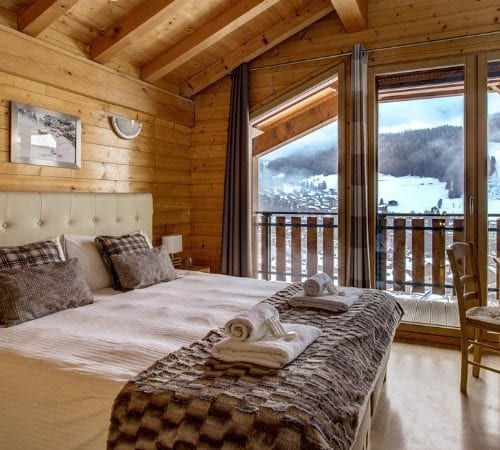 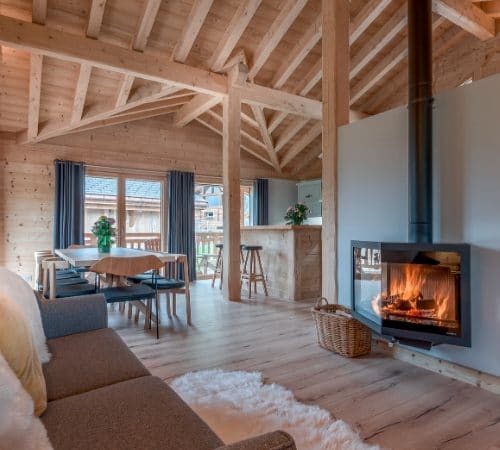 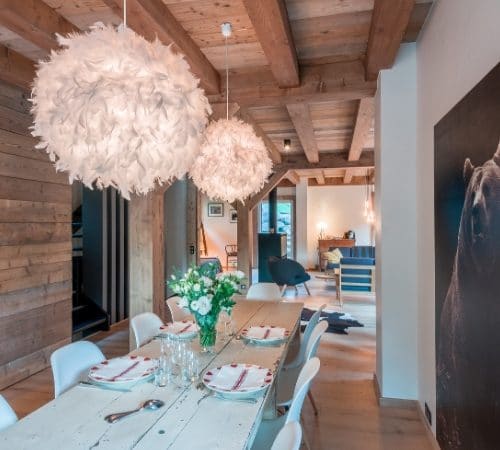 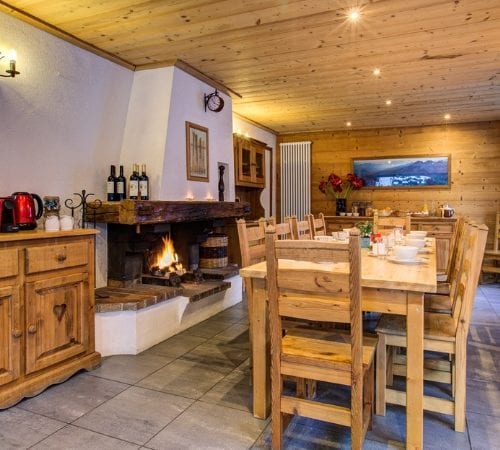 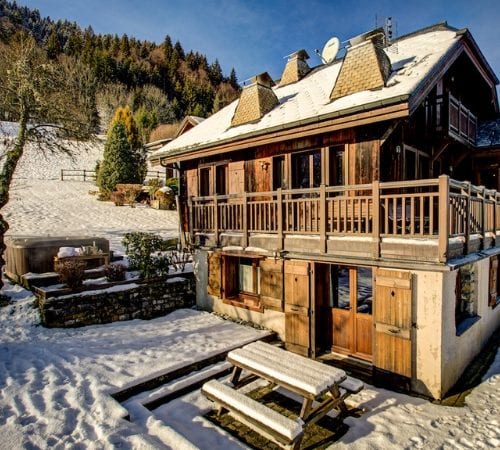 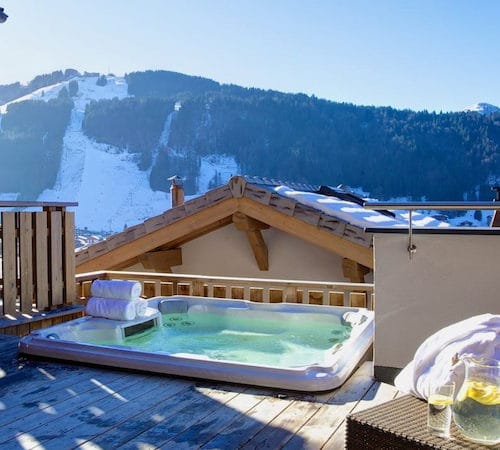 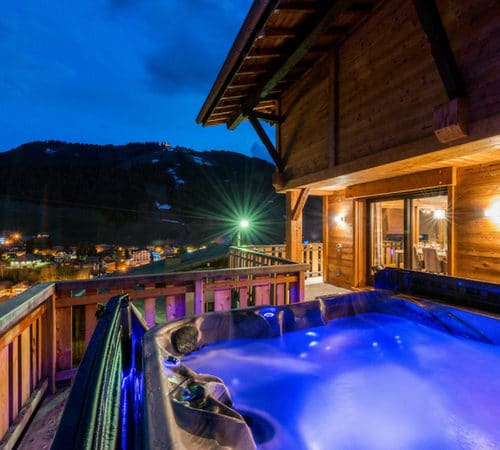 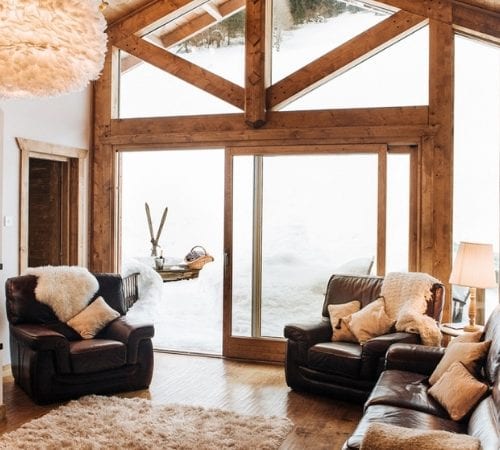 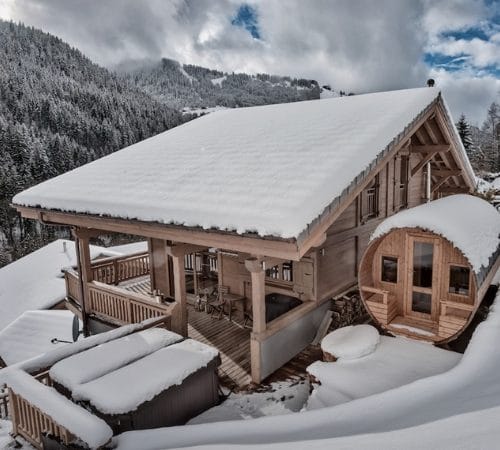 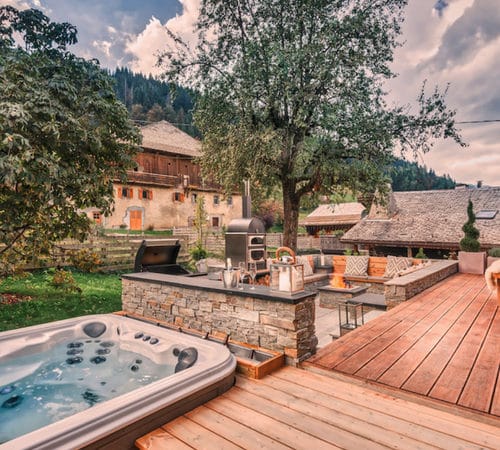 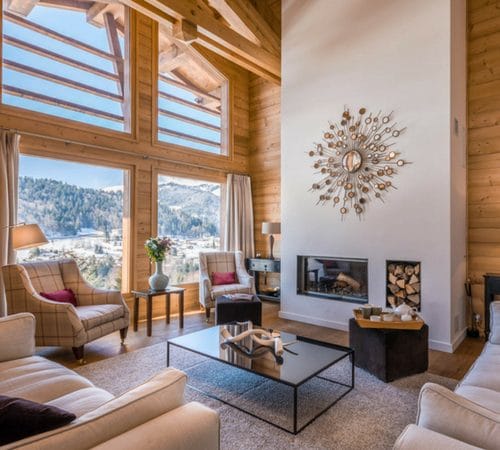 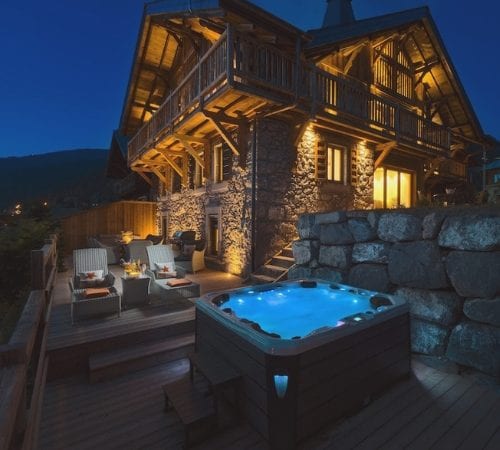 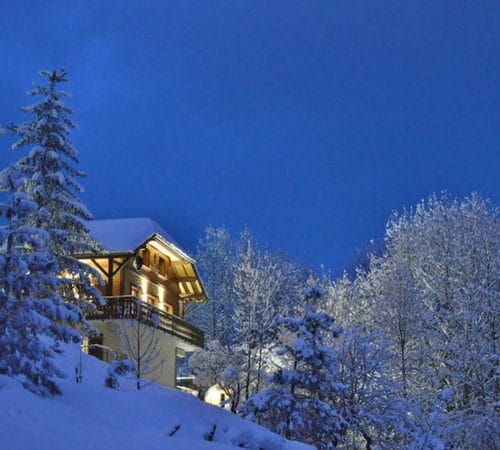 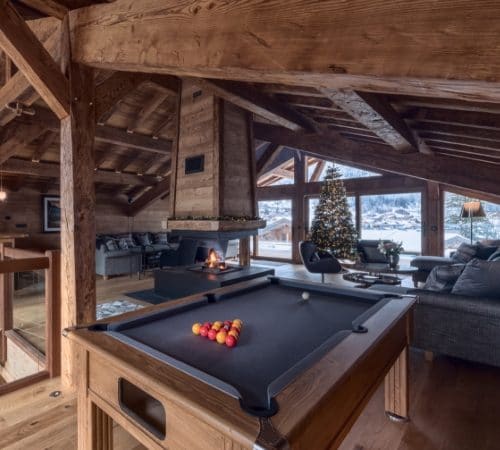 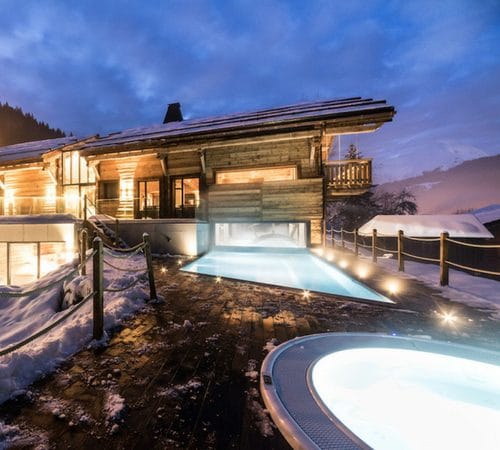 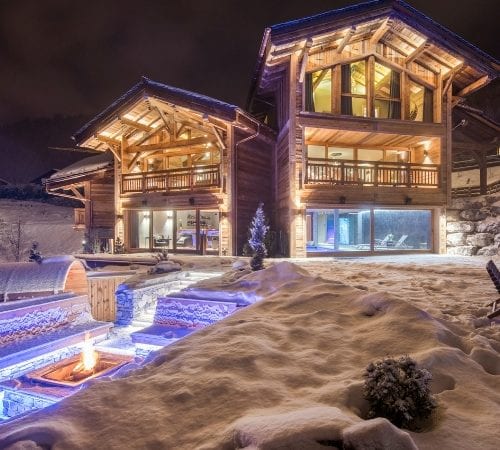 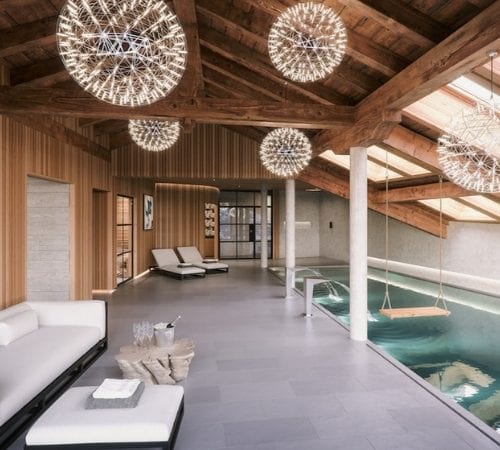 And we’re back on the gram! Sorry we’ve been s

WE LOVE WHAT WE DO & want to support the Ski Trave

If you are searching for something to look forward