A favourite of royalty and Hollywood Stars since the Golden Age, Gstaad is a beautifully understated resort choc full of designer boutiques and gourmet restaurants and let’s not forget the great ski area too.
BOOK A LUXURY CHALET
View Chalets View Resort GuideWhy Choose Us Client Reviews

Discover our Collection of the Finest Luxury Chalets in Gstaad

Located in the Bernese Oberland in Switzerland, Gstaad is a picturesque and glamorous resort frequented by royalty and hollywood stars. Its pedestrianised main street is lined with designer boutiques and gourmet restaurants and there and some wonderful luxury chalets here. The local ski area is excellent for beginners/intermediates and extends to 220km of piste, including the snowsure ski slopes of Glacier 3000.

220 Km (including skiing at nearby Chateau d’Oex, Saanenmoser, Zweisimmen and Glacier 3000)

Who is Gstaad best for

When to visit Gstaad

From early December to mid-April, with the Glacier staying open all year round.

Each sector of Gstaad’s extensive ski area has its own separate beginners area with its own private ski lifts and a choice of ski schools offering to teach beginners there.  There’s plenty of easy terrain to progress on to too.

There’s no resort childcare for pre-ski babies and toddlers so chalet provision is required, or a nanny or babysitter. For skiing children there are secure learning areas and lots of good ski schools to choose from. 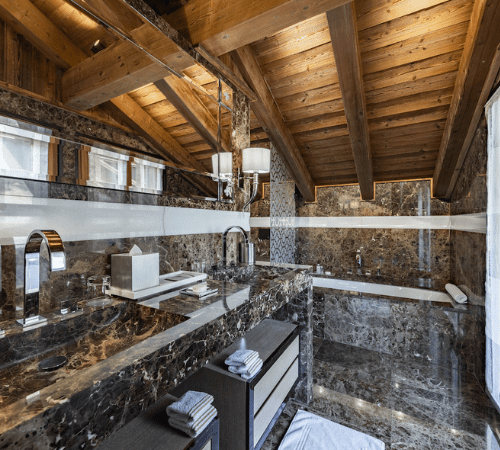 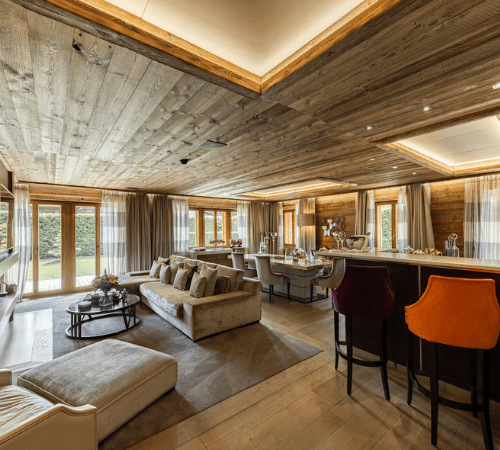 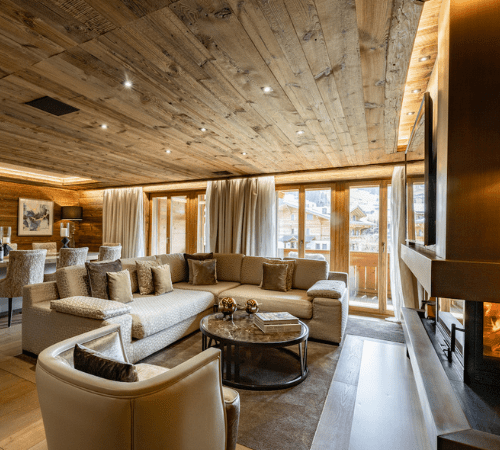 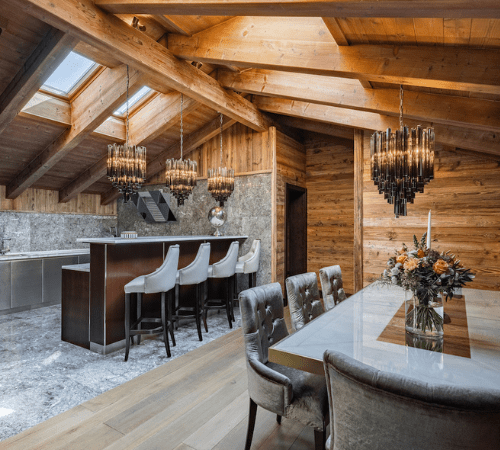 One of the contenders for the title of ‘most exclusive resort in the Alps,’ everything about Gstaad oozes quality and class. The pedestrianised main street is lined with discreet boutiques like Prada, Cartier, Louis Vuitton, Hermes and Chopard with Prada, Moncler, Ralph Lauren, and Cartier and pretty well every other haute couture and jewellery brand has a presence here in some way or other.  Given these retail riches, along with a great selection of gourmet restaurants, some superb hotel-spas and phenomenal chalets, the actual skiing is almost an after-thought. But not quite.  There are some 250km of runs on the local lift pass, divided up between half-a-dozen or so separate areas surrounding the resort.

Gstaad lies on the border of the French and German speaking sides of Switzerland.  The mountain train which runs through the resort, linking it to neighbouring villages, and their ski areas, only a few minutes away can take you to Rougemont then Chateau d’Oex, on one side, where you’ll heart French, or Saanenmoser and Zweisimmen on the other, where it’s German.  The train is the traditional way of getting between the ski areas that make up the Gstaad region. Hop on in the town centre and off five or ten minutes away then in to an adjacent gondola and up in to the mountains.  Your chalet will most likely have a chauffeur service of course, but the old-fashioned way is still fun.

Gstaad has been a famous mountain resort for almost a century. In the 1920s an exclusive school, ‘Le Rosey’ opened, a little over a decade after the railway line reached the village.  The school catered for the children of royalty, politicians, show business stars and leading figures of business and industry.  At the same time the famous Palace, one of the world’s great ski hotels. opened to cater for the parents of these illustrious offspring. The skiing itself really took off after the war with small ski areas by Gstaad itself and above neighbouring villages eventually partially inter-linking with ski lifts above as well as by road and railway line in the valley below and all coming under the one regional lift pass.  Most recently this was expanded to include the high altitude ski slopes of Glacier 3000, located 15km away near the village of Les Diablerets which is open from October to May each year and provides a snowsure option for Gstaad’s visitors.

The Gstaad ski area is officially broken in to six sectors, but some of the larger parts are themselves actually divided into several separate parts so there’s actually even more and you can choose a different sector in which to ski every day of the week. Whichever you choose however you’ll find pretty runs, mostly below the tree line and lots of lovely, cruisy blues and reds, usually with an enticing mountain restaurant around every turn.

The largest single sector links the slopes above Schonreid, Saanenmoser and Zweisimmen, the closest part of which (at Schonreid) is only one stop on the train line/five minutes from the resort.  In the other direction the second largest links the skiing above Saanen and Rougemont on the French-side of Gstaad.  There are several more smaller areas local to Gstaad, the largest at Wispile above the resort itself.

Most of these areas have at least one black run but they are rarely terribly challenging so expert skiers will most likely need to look elsewhere or head off piste. The 2.5km long Tiger run at Wasserngrat is the steepest in the area

Beginners and children are well looked after in Gstaad with private slopes reserved just for them the normal across the area – in total there are seven separate such beginner zones, each with their own lifts, spread across the ski region.

There’s also a large number of ski schools offering private or group lessons, and once basic technique is mastered, plenty of easy runs in each sector to progress on to.

There’s no municipal childcare but many accommodations have their own childcare in house and a list of approved babysitters is also available through the tourist office.

As with the other aspects of day-to-day life in Gstaad, the apres-ski scene is refined and under-stated with gourmet restaurants and sophisticated hotel lounge bars the evening norm.

Of course people do still want a drink when the slopes close and there are bars at the base of the slopes in the different sectors, it’s just with them being spread along the valet floor the crowds don’t gel together.  Instead many head back to central Gstaad to meet up at venues in the centre near the station.

Later on the place to see and be seem is the GreenGo Club at the Gstaad Palace hotel, one of the longest surviving famous nightclubs of the asking world it first opened its doors in 1971, with its dance floor suspended above the hotel swimming pool and it has maintained the 70s décor to this day.  It, and several other late night dance spots, are usually open to 4 or 5am.

Berghaus Horneggli (Horneggliweg 5, huettenzauber.ch) is a traditional Swiss mountain chalet, nearly 200 years old, with large terrace and great views from its location at 1,770 metres of altitude, right on the piste of Schönried’s local mountain.  Great local dishes including fondue.

The Cosy Berghaus La Videmanette (+41 26 925 87 44) is perfectly located between the limestone towers of Mt. Rüeblihorn and La Videmanette and offers a fantastic panoramic view of the Bernese and Vaud Alps., ideally enjoyed from the sun terrace whilst eating a good meal.

The Bergrestaurant Rinderberg-Spitz (+41 33 748 96 42) located 2011m up at the top station of the Zweisimmen-Rinderberg gondola is located directly on the slopes and offers a good menu of local favourites to fill you up for the day.

The Michelin-starred Chesery (Alte Lauenenstrasse 6; +41 33 744 24 51; cheesery.ch) is something of a resort institution, am ancient cheese dairy converted to a restaurant by the Aga Khan in 1962. Chalet style though a little too kitsch in décor for some, the food appears deceptively simple and tastes fabulous.  Unusually good vegetarian selection.

La Bagatelle (Neueretstrasse, Le Grand Chalet; +41 33 748 76 76; grandchalet.ch) is one of the most highly regarded in the village with dishes like sea bass and asparagus risotto particularly popular.

If you fancy something different to all that filling cheese and beef perhaps Megu (Alpinastrasse 23, +41 33 888 98 66, thealpinagstaad.ch), a contemporary sushi restaurant within the Alpina Hotel could be your answer.

Gstaad Snowsports (gstaadsnowsports.ch) offer the full range of private and group lessons for children and adults. Lots of imaginative ideas including the 007 SnowAcademy for teens.

Speak to a specialist

Why Choose Us For Your Bespoke Chalet Holiday in Gstaad?

As a respected and trusted agency with over 16 years of experience, you are in good hands. We have travelled the Alps to put together our comprehensive portfolio and know all of our chalets and owners personally.

What’s more, we will always offer an honest, unbiased opinion to help you secure the chalet that’s right for you, at the best price. With free pre-arrival concierge thrown in.

Plus if you can’t find what you’re looking for on our site, simply get in touch. We have access to a whole host of stunning chalets and family-friendly properties not yet featured on our site.

All of our chalets have been hand-picked with exceptional service and experience in mind. Our comprehensive portfolio offers you access to all of the finest luxury ski chalets in Europe’s leading ski resorts.

Our ski specialist offer friendly impartial advice and have unrivalled resort and chalet knowledge. They have also visited the properties so we have first hand experience of what will be the best fit for you and your group.

Our pre-arrival concierge team work around the clock to ensure you have everything organised to perfection. From expert advice on the liveliest après ski stops to husky sledging, heli-skiing or a private jet, no request is too difficult.

Our prices are never undercut. We are competitive in the market and do the research to secure the best deal on your behalf. So you can rest assured you will never find the chalet at a better rate elsewhere.

We go that extra mile
“

Wow. What an amazing trip from start to end. The Chalet Edit have curated an incredible set of properties. Alongside this the service was faultless; incredibly responsive, knowledgeable and friendly. The team were always thinking ahead of things we needed and provided great recommendations about all aspects of the holiday from childcare, hire, and transfers to restaurants and apres spots. Would not hesitate to book again with the Chalet Edit.

Annabel and Anna were so helpful with all aspects (chalet, transfers, childcare, ski equipment etc) and super-efficient. Transparent and timely communication around all Covid aspects too. Would definitely book again, as they really made it so easy for me! Thank you so much for everything.

Excellent service from Anna at the Chalet Edit. Super knowledgable regarding the resorts and properties. Very proactive in helping navigating all travel complications due to COVID restrictions. Has become my first port of call for skiing property needs!

Chalet Shemshak, Courchevel 1850 has an entire floor dedicated to wellness and relaxation… 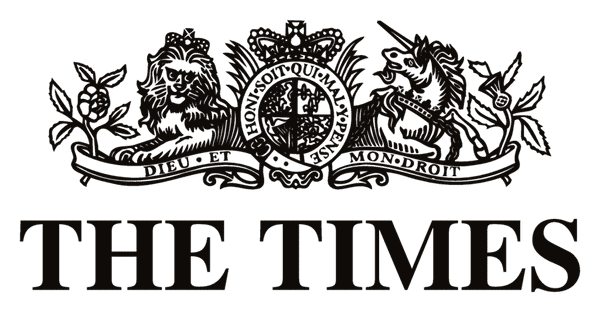